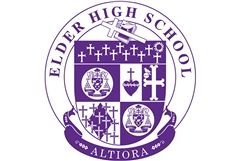 The coat of arms is the official insignia of Elder High School. It depicts the history of the school on its surface.
Heraldic devices such as this were originally embroidered on surcoats worn over the armor of knights or nobles as identifying symbols during the medieval ages.
Only the nobility were entitled to depict their family genealogy and rank by such a device. In the Catholic Church a similar restriction permits only prelates, religious orders, and institutions to use the coat of arms.
Elder's shield with its armorial bearings is divided into four compartments. According to the rules of heraldry the title conforming to the insignia should appear twice on the shield. Therefore, the coat of arms of the late Archbishop Elder, in whose honor this school was named, is placed in the first and fourth quarters of the shield.
The second quarter of the shield is divided vertically. The right-hand portion of this contains a representation of the Sacred Heart to Whom the school was dedicated, while at the left is shown a cross and dove, symbols of the seal of the late Archbishop Henry Moeller in whose reign Elder High School was established in 1922.
The eleven original parishes of the Western Hills through their joint effort were the true founders of the school. So they, in the form of the eleven crosses with the setting sun, which represents the Western Hills, must, by the rules of heraldry, take the place of honor across the upper portion of the shield. With these crosses appears a "label," an inverted coronet, indicating that Elder is the oldest parochial high school in the city.
In the third quarter of the shield is depicted a "lozenge," a diamond-shaped object denoting women, over which are superimposed twelve crosses. The "lozenge" indicates the transfer of the girls' department to Seton in 1927. The twelve crosses represent the twelve new parishes added to the Elder district, at that time.
Beneath the shield the "escrol" is portrayed bearing the motto of the school, "Altiora," which means "The Higher Things."
Surmounting the shield proper is the crest, consisting of a Latin cross, two closed books, a student lamp, and a scroll, before the replica of the "Towers of Elder." This is a representation of Catholic education as expounded by Elder, "Our Alma Mater."
Back
3900 Vincent Avenue
Cincinnati, OH 45205
Phone: (513) 921-3744
Fax: (513) 921-8123
Cincinnati’s First Catholic Diocesan High School