School Resources
"The soldier above all others prays for peace, for it is the soldier who must suffer and bear the deepest wounds and scars of war."

A Commitment to Serve 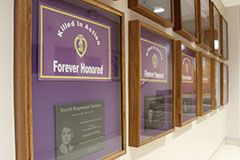 Elder High School's commitment to serving others is not only taught inside our classrooms, but also practiced within our community and around the world itself. Perhaps the noblest quality of "the Elder Man," service to others is selflessly displayed by countless alumni who have chosen to enter the armed forces. This page is dedicated to the men and women in our nation's military, to our veterans and their families, and to all those who follow in their footsteps.
"The LORD bless you and keep you! The LORD let his face shine upon you, and be gracious to you! The LORD look upon you kindly and give you peace!"

Changing of the Signs

On September 4, 2014, Ohio’s Governor signed into law Senate Bill 245 directing that a section of Ohio Route 264 (Glenway Avenue), approximately one-quarter mile long extending from Beech to Gilsey, be renamed the Elder High School Vietnam Veterans Memorial Highway to honor the men of Elder who died while serving in Vietnam. The bill also permits Elder High School to attach an “auxiliary marker” bearing the name of an Elder grad who was killed in action to the larger memorial road signs.

Each year, on Veterans Day, Elder High School pauses to not only honor those men, "The Elder Eleven," who made the ultimate sacrifice so many years ago`, but also those grads who died later in life from causes related to combat in southeast Asia.

The Support the Troops Club is a student organization at Elder which regularly meets to brainstorm ways it can give back to the grads and friends of the school who give so freely of themselves while serving in the military.

This nonprofit fund was founded to memorialize the sacrifices that men of Elder have made to this country while serving in its military. Although the fund was named in honor of Hank Mueller, a 1966 graduate who was critically wounded in Vietnam, it is dedicated to all living and deceased veterans. The fund provides a four-year renewable scholarship to a student of Elder, as selected by the school's scholarship committee, whose close relative either actively serves in the military or is a military veteran. Interested applicants should contact Elder's Admissions Office for more details.