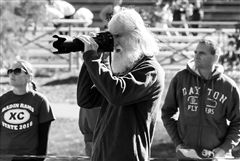 Mark Klusman, Elder Class of 1961, devoted over 51 years of his life to the service of Elder teaching just about half of the classes Elder has to offer, including classes in the field of technology in the latter part of his career.  When many 74-year-old men are finding it difficult to turn off their cell phone ringer during Sunday mass, Mark was teaching software use and computer programing. You could see him at every Elder event behind the lens of his camera. This was the side of the camera he ALWAYS chose to be on. He also served as the unofficial photographer, trainer, coach, and moral compass of his beloved Cross Country team.

Mark assisted in every community service project Elder had initiated over the last 35 years of his career. These projects included feeding hungry families during the Christmas season, restoring dilapidated housing for the homeless, and the never ending task of beautifying the neighborhood. He also worked closely with Price Hill Will in cutting grass at abandoned properties and providing employment for neighborhood kids. Mark received several awards for his service to the community, including the St. Dorothy Day Award by the Archdiocese of Cincinnati, Volunteer of the Year Award by the foundation to Keep Cincinnati Beautiful, and the Most Valuable Volunteer Award given by Over-the-Rhine Community Housing. Additionally, Mark was involved in the Kairos senior retreat program at Elder. Undoubtedly, the lives of thousands have been enhanced by this humble, gentle man.

In December of 2017, Mark was badly injured while working on a Price Hill cleanup project with Elder students. A few weeks after, he passed away leaving a giant smiley face sized hole in the hearts of so many in the Elder community. A generous gift to Elder from a former student, along with a multitude of memorial gifts helped create this scholarship that will forever honor the legacy of a man who always “made great days” for all who had the good fortune of knowing him.
Back
3900 Vincent Avenue
Cincinnati, OH 45205
Phone: (513) 921-3744
Fax: (513) 921-8123
Cincinnati’s First Catholic Diocesan High School